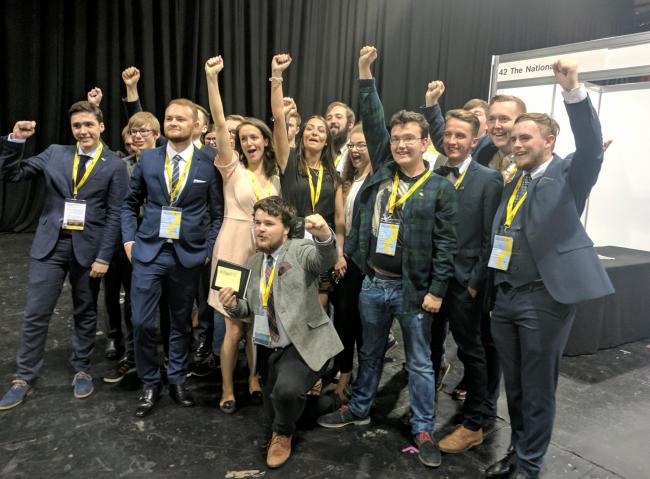 Conference notes that the UK is the only European & NATO country to recruit 16-year-olds into the armed forces, in conflict with the internationally recognised UN Rights of the Child.

Conference notes that those who join the armed forces under the age of 18 are more likely to be killed or injured in service, suffer from alcohol abuse and mental health issues than standard entry recruits.

Conference calls upon the UK Government to work towards raising the minimum armed forces recruitment age from 16 to 18 for all roles that require combat training in line with international standards and affirms that this will form a part of the SNP’s Defence Policy for an independent Scotland.

The resolution was passed without the amendment that had been put forward by the SNP leadership, which would effectively maintained the status quo.

Some excellent speeches were made, particularly by members of Young Scots for Independence, the youth wing of SNP who have done so much to progress this issue.… Read more

This article by Jonathan Parry. Lecturer in Global Ethics at the University of Birmingham, explores the dangers involved in miltary activity in schools and for the youngest recruits. It emphasises the moral risks and the ‘moral exploitation’ involved.

Kill or be killed

But as well as the risk of death and injury, I think we should pay attention to a less obvious risk that is impose on these soldiers – and that is the moral risk of engaging in serious wrongdoing. As General Sir Michael Rose puts it:

No other group in society is required either to kill other human beings, or expressly sacrifice themselves for the nation.

Since committing unjustified homicide is a terrible stain on a person’s life – as well as a cause of psychological harm – we should worry about the risks of young people becoming killers. And not just the risk of being killed.

Philosophers have become increasingly interested in military ethics over the last two decades – with many arguing that killing in war should be subject to the same ethical standards as killing in other areas of life. An important implication of this view is that there is nothing morally special about war, and that fighting in unjustified wars typically involves grave moral wrongdoing.… Read more