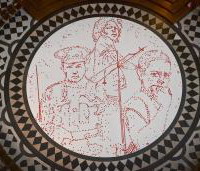 An installation of poppies in St Paul’s Cathedral marks the continued involvement of children in war, despite its practice being declared illegal by the UN.

Over 5,000 poppies will be scattered under the dome of St Paul’s in an art installation on Remembrance Day, Friday 11th November 2011. From ground level the poppies appear to have fallen randomly, but when viewed from the Whispering Gallery the poppies form an image of three child soldiers; one from the First World War and two from more recent conflicts.

The 30 foot wide installation created by artist Ted Harrison highlights the involvement of children in war. Although declared illegal by the UN some 250,000 under-age children are currently active combatants – most having been forced or coerced into volunteering. Thousands are killed, wounded or traumatised every year.… Read more

Failures to implement Ministry of Defence policies on discharge have resulted in teenage soldiers being imprisoned for attempting to leave the armed forces, reveals a new report by the Coalition to Stop the Use of Child Soldiers (the Coalition), published on Thursday 24 March 2011.

“Catch 16-22: recruitment and retention of minors in the British armed forces”, reveals that provisions to allow recruits under the age of 18 to be discharged if they want to leave the armed forces are not being applied consistently or effectively. As a result, young soldiers have been detained in the military prison in Colchester for going absent without leave (AWOL) while under the age of 18.

Organizations providing advice services to armed forces personnel have informed the Coalition that they regularly receive calls from young recruits who are having trouble getting a discharge or have gone AWOL. The Coalition’s new report reveals that in 2010 at least eight of the under-18s who had gone AWOL were sentenced by court martial to military imprisonment.

“The Ministry of Defence has repeatedly claimed that recruits under the age of 18 can get a discharge just by asking for it.… Read more

The MoD is criticised for lowering standards since WW1 and despite thousands of planned redundancies, it still recruiting children at twice the cost of adults.

MPs are expected to criticise the Ministry of Defence for sending underage soldiers to war in a special debate in the House of Commons today (Thursday 10 November).

On Monday 7 November, the Ministry of Defence rejected fresh calls to review its policy on deploying underage soldiers, despite recently admitting that it had sent four soldiers aged below 18 to Iraq and Afghanistan between 2008 and 2010.[i]

Fabian Hamilton MP (Labour) said, “On the eve of Remembrance Day, it is remarkable and tragic that the Ministry of Defence insists on recruiting and deploying teenagers who would have been ruled out as too young to join the British forces even in the most desperate hours of the First World War.  It is unacceptable that standards are lower now than they were a century ago”.

Throughout the First World War the official minimum age for enlistment or conscription was 18 years, and 19 was the minimum age to be sent to the frontline. … Read more

“We can best pay tribute to their sacrifices by ensuring that in the future no British sailor, soldier, Marine or airman is asked to lay down their life except for the most urgent and honourable of causes.”

Do you think Blair should have sent us in?’ It was April 2003 and the soldier in the hospital bed fixed me with a piercing stare as he asked the question, fighting back tears.I stared back equally intensely. Partly because I wanted him to know he had my full attention with all the distractions of medical activity going on around us. Partly because the medication was affecting his speech.

But mainly because I knew that if  my concentration broke for a second my gaze would shift to the stained bandage that marked the spot where his arm used to be. Even then, my nostrils would not allow me to forget the extent of his loss.

His good hand gripped mine with all the strength he could muster. If I said ‘yes’ and offered a few platitudes I was sure he would detect the lack of conviction in my voice. And if I said ‘no’ I would have belittled his life-changing personal sacrifice on the battlefields of Iraq.… Read more