Kids with guns: Should the armed forces encourage young people to interact with weapons and military vehicles?

In June 2014, North Wales Armed Forces Day was held in Wrexham. Wrexham Peace and Justice Forum were concerned that they were being asked to ‘celebrate’ and ‘thank’ the Armed Forces ‘without any critical analysis of the recent conflicts they have been involved in’ and that the event would be used for recruitment, particularly aimed at children. 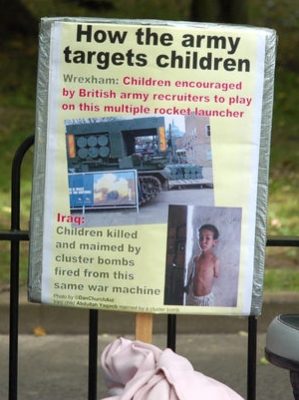 They coordinated an open letter to Wrexham County Borough Council, which was signed by over 100 people and organisations. The letter protested against the council’s promotion, sponsorship and funding of Armed Forces Day,  and specifically the use of a picture of a toddler in military gear to advertise it. It highlighted the terrible effects of war, the inappropriateness of presenting it as entertainment, and the dangers of the recruiting messages at the event. It also raised concerns that the North Wales Armed Forces Day Ambassador (a young veteran) had recommended that under-18s should sign up for the forces.

The letter was also sent to local councillors and the local paper. When the council replied, and following some negative coverage from the media, individuals followed up the initial letter with further letters to the council and local press.

The council’s response to the open letter came from the Armed Forces Champion. He explained that, ‘by signing the Covenant we, and our partners, undertook to encourage the recognition of Armed Forces through activities such as Freedom, Homecoming and Remembrance parades and support Armed Forces Day.’

Members of the group responded to the Armed Forces Champion and to others in Wrexham Council, saying for example, particularly raising concerns that the use of the event to target recruitment towards children and to associated weapons with entertainment were not addressed.

On the day of the Armed Forces Day event, Wrexham Peace and Justice carried banners, placards and leaflets encouraging alternative perspectives on war.

Groups in Wales have continued to raise awareness about their concerns at subsequent North Wales Armed Forces Days.