Kids with guns: Should the armed forces encourage young people to interact with weapons and military vehicles?

Members of Leicester for Peace/Leicester Against War and Civic Leicester have grown concerned in recent years about the presence of Army recruiting stalls in Leicester city centre and with young children encouraged to handle weapons and sit in and play on military vehicles.

For several years, they documented this activity, sharing the photos on social media and with civil society organisations working for peace and social justice. Their Facebook photo albums included links to resources including a report by public health charity Medact on the health impacts of early enlistment and a letter from child and human rights groups to the Ministry of Defence regarding the recruitment of minors.

As the recruitment activities were taking place, members of the peace groups distributed leaflets and talked to passers-by about what was happening and what their concerns were, and giving a more critical perspective about joining the military than that presented by the Army personnel.

As well as their ‘War Hurts Everybody’ placard, they produced signs about recruiting under 18s, militarism and more. These were generally well received by passersby, some of whom would join in. On one occasion, a young man signed papers with the army at their stall, then came over to talk to the group and took their leaflet as well as a ‘Before You Sign Up’ card (this gives the information of a website providing balanced information about joining the forces).

As well as reaching out to people in the town centre at the time of the recruitment activities, the group also raised the issue in the local paper. This is an effective way to alert local decision-makers to concern as well as the wider public.

Civic Leicester also provided ideas of what people could do if they wanted to take action on the issue. For example, they suggested that people contact their councillor and MP and ask them to insist:

The Leicester group conduct a peace vigil every Friday afternoon in the town centre, engaging the local community on many issues and offering an alternative to the Army’s recruitment displays. Sometimes they partner with other groups such as Veterans for Peace UK and Leicester CND to witness the activities and give out information.

In addition, the group are in touch with their local National Education Union branch, and organised a public meeting to debate Army recruitment activities in the town centre with speakers from the union, the local university, Forceswatch, and from the council’s events team.

One of the results of this engagement with the NEU has been the development of a consultation of Leicester headteachers, on the recruitment of children into the armed forces, military recruitment in schools and the provision of balanced perspectives when the military conduct activities in schools.

This may lead to further action from the NEU, as well as developing awareness among Leicester school leaders of recruitment initiatives in schools, and the child rights concerns associated how the armed forces engage with young people.

Leicester for Peace/Leicester against War have developed and promoted the ‘Leicester Charter on the reduction of the militarisation of children and young people’. The aim of the Charter is to build awareness and active support across diverse local communities for initiatives that limit the exposure of young people to military promotional and recruitment activities. Amongst other things, it asks that ‘no child under the age of 18 be allowed to handle guns at these military displays’.

As a local community response that mirrors the Armed Forces Covenant in its format of asking people to pledge support, the Charter is a powerful call for an ethics-based approach that has limited and reasonable ‘asks’.

The  Charter was constructed as a Google Doc form, so people could easily add their signature. They met once every year to discuss progress and update the Charter.

As a document with support from different parts of the community, the Leicester Charter has proved to be effective in helping to raise the issue of military recruitment activities with weapons and military vehicles with the local council. The Mayor of Leicester acknowledged the concerns and agreed a change in practice regarding the age at which young people would be able to handle the weapons: 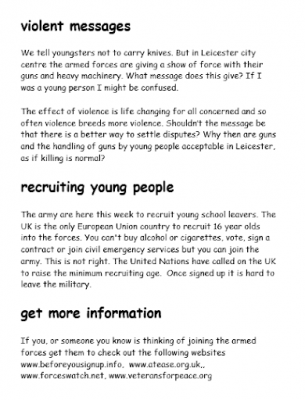 Leaflet given out to the public in Leicester

‘The Council of course understands that there are very differing views about such displays. As a Council, we have signed the national Armed Forces Covenant to show our respect and support for the work that the Armed Forces do, however we fully appreciate the concerns your raise regarding glorification of violence amongst young people particularly.

‘Our Festival and Events Team who are responsible for managing bookings of city centre spaces have agreed that they will make it a condition of any future bookings by the Armed Forces that they do not allow anyone who is not old enough to join the armed forces to handle any weaponry.’

Despite the Mayor’s commitment regarding the minimum age for handling weaponry, the peace group subsequently witnessed and photographed young children handling weapons at a town centre recruitment event. They sent evidence to the Mayor, who had asked them to let him know if the Army were not complying.

The subsequent response from someone in the events team rather than the Mayor himself was less encouraging. The response added the caveat that children too young to join the military couldn’t handle weaponry ‘without parental consent’. This is however, already the Army’s position.

The group reminded the Mayor and events team of the discrepancy in their responses. They were assured by the Mayor that his initial email did still stand, with no ‘parental consent’ caveat.

Yet for a while, the military were still subsequently seen on the streets of Leicester with young children handling weaponry. The group continued to monitor this and push for the council to enforce their policy.

At the end of May 2019, the Leicester group again went to watch the military recruitment on the streets – and found, finally, that their advocacy had achieved its desired results: the City Council had enforced their new policy regarding children handling weapons. There were no big armed vehicles, and the only guns there were displayed at the back of a gazebo – and the personnel were not allowing children to handle them. They wrote to the Mayor to thank him ‘for protecting children and young people in this way and for reducing the spectacle of gun promotion.’

The group will continue to monitor military activities and ensure that the policy is being adhered to.

A recent freedom of information request shows that Leicester Council still considered it policy for no-one under the age of recruitment to handle weapons ‘without parental consent’. The Leicester group will again be re-approaching the Council to remind them of the agreed policy, which does not include the ‘parental consent’ caveat and that the detail of the policy is understood throughout the council.