The Citizenship Foundation’s new resources on ‘values in the classroom’ , which they have launched to aid teachers meet the new government expectation that they ‘promote ‘character’ and ‘British values”, focus on facilitating primary school students’ critical thinking skills, encouraging them to ask lots of questions of the texts/stories they are presented with.

The first resource includes a video of a year 6 class doing one of the exercises together, which is very helpful in illustrating what a good classroom discussion looks like.

An additional resource focuses on an exercise which ‘enables children to talk about the difference between power based force and the proper rule of law in which fairness is achieved through consultation and democracy.’

If these sorts of rigorous approaches to discussion were taken regarding all armed forces engagement with schools (such as any use of the very one-sided joint-Ministry of Defence and Prime Minister’s Office ‘British Armed Forces Learning Resource‘), students in the UK would have a much more balanced impression of the military.… Read more

Here are several updates following last week’s government budget announcement that £50 million would go to expanding the number of state school Combined Cadet Forces to 500 (an increase of over 300), focusing on disadvantaged schools:

* Criticisms of the funding decision have come from the National Youth Agency (“it’s a real missed opportunity not to have invested some of it in good quality youth work which delivers ‘character’ and a whole lot more besides for young people”), and the Quakers (“Ultimately, militarism in schools leads to two kinds of recruitment: the recruitment of teenagers into the armed forces, and the recruitment of wider society to be war ready. Both go undebated. Why can’t we invest in education for peace, not war?”)

The number of cadet units in state schools is to increase five-fold by 2020, George Osborne announced today in the Summer Budget.

Mr Osborne said the government will pledge £50 million to create cadet forces in 500 state schools and said these would be prioritised in “less affluent areas”.

The Chancellor of the Exchequer said: “We are committing £50 million to expand the number of cadet units in our state schools to 500, prioritising less affluent areas.”

Currently there are about 275 cadet units in the UK. Of these, only a third are in state schools.

According to the Ministry of Defence (MoD), as of April 1 last year there were approximately 131,000 cadets in the UK. The number is almost evenly divided between the Combined Cadet Force (42,950), a scheme run through schools, and the Army Cadet Force (41,000).

The Department for Education confirmed that a request for the extra funding had been made by the MoD.

The MoD has faced criticism recently after Schools Week revealed it had put in a request to access sensitive pupil data in the National Pupil Database. It wanted to “target its messaging” around military careers.

And a Treasury spokesperson told Schools Week the money would come from fines levied on banks.… Read more 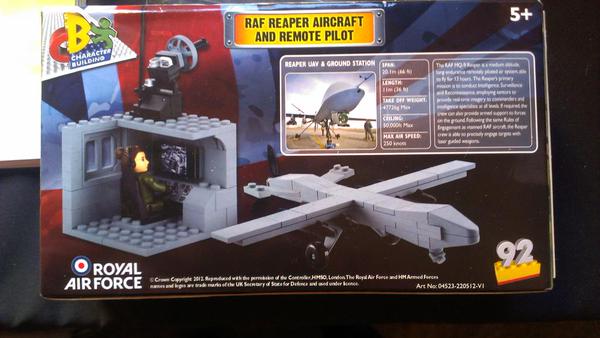 A ‘Character Building’ series of armed forces toys licensed by the MoD is discredited by the new Veterans for Peace UK short film on some of the things that these toys don’t show, and by developments in ‘character education’ that indicate there is no need for ‘military ethos’ initiatives in UK schools.

Following the launch of Veterans For Peace UK’s new short film and toys, Battlefield Casualties – in response to the overwhelmingly sanitised image of war presented by most contemporary military toys, and in response to indications that ‘character education’ needn’t involve any military element, it’s striking to come across this ‘Character Building’ range of Lego-like HM Armed Forces toys, licensed by the MoD in 2011, which add to a series of more ‘lifelike’ (though equally sanitised) action man-style armed forces toys from the same company.