A third of a £6 million funding pot aimed at building character in school pupils will be targeted at military-style projects, prompting criticism from campaigners. 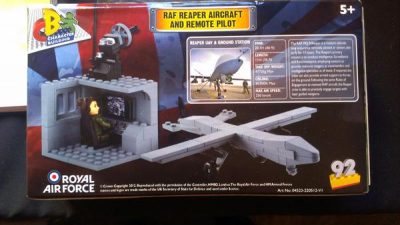 A 'Character Building' series of armed forces toys licensed by the MoD is discredited by the new Veterans for Peace UK short film on some of the things that these toys don't show, and by developments in 'character education' that indicate there is no need for 'military ethos' initiatives in UK schools.

In a new film from the Quakers, comedian Mark Thomas and former MP Clare Short claim the Government is misusing the education system to encourage support for its wars and to promote careers in the armed forces.

A former cadet’s experience of the Combined Cadet Forces

Looking back on being part of a school-based cadet unit, the author reflects that, despite the fun and experience to be gained, the benefits could be achieved with non-military activities which would not present a dangerous and risk-laden career as an enjoyable and exciting activity or expose young people to an environment where bullying and hazing are normalised.

The Department for Education has given out its £3.5 million ‘Character Awards’ and its £3.5 million Character Education grants, both championed by Secretary of State for Education Nicky Morgan, to 27 schools and youth organisations in England, and 14 youth projects, respectively.  Despite the DfE's heralding of 'military ethos' as an  excellent means of developing character, none of those awarded mention military-style activities in their descriptions (see here and here).

Army cadet units could help cut the rate of teenage pregnancies, an education minister has said.
Lord Nash said teenage girls from single-parent families who had “never experienced the love of a man” could be deterred from forming “unsuitable relationships” if they enrolled in a cadet unit.

More questions raised about the ‘Military Ethos in Schools’ programme

The Department for Education has committed a further £3.5m to fund organisations building 'character' among school students, and £1m for research to find the most effective ways that character can be taught in schools.