The Peace Education Network is a national UK network that brings together people and organisations committed to education for peace. 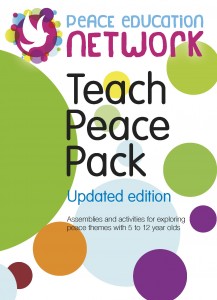 Teach Peace, a new resource from the Peace Education Network, is a set of eight assemblies, follow-up activities, resources, prayers and reflections on peace for primary schools. From the UN peace day, 21 September, to the International Day for Children as Victims of War, 4 June, the school year is ?lled with opportunities to use the assemblies and activities in Teach Peace. This resource will help to ensure peace is a key theme in our children’s education and help you to celebrate peace and the peacemakers in your school. The entire resource is free to download below. Hard copies of Teach Peace are available from the Peace Education Network for £5. Also available in Welsh.