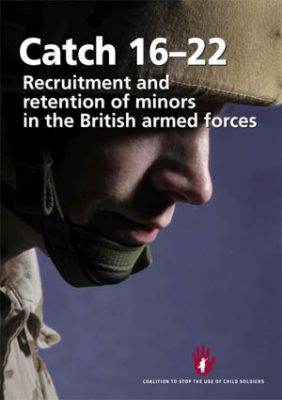 November 2009
In their report on Children's Rights, the UK Parliamentary Joint Committee on Human Rights recommended that the 'UK adopt a plan of action for implementing the Optional Protocol, including these recommendations, fully in the UK, together with a clear timetable for doing so.' The UN Committee on the Rights of the Child recommendations under the Optional Protocol were that the UK 'reconsider its active policy of recruitment of children into the armed forces' and a number of other measures.

October 2008
The UK remains the only EU country to recruit 16 year olds into the military and one of very few EU countries to recruit 17 year olds. The UK has signed the Optional Protocol to the Convention on the Rights of the Child on the Involvement of Children in Armed Conflict yet there is evidence that the UK continues to target children from vulnerable groups and that safeguards to protect under-18s are not effective.

Militarism, War and Resistance: Lowkey in conversation with Maya Evans and Joe Glenton

This event will be a live recording of the ForcesWatch Warrior Nation podcast with renowned political hip-hop artist Lowkey, co-hosted by anti-war activist Maya Evans and author and former soldier Joe Glenton. Topics will include the current state of militarism in the UK, Britain’s love affair with war at home and abroad and how we can resist through culture. Tickets cost between £1 and £5 (redeemable against any purchase) and are available here.