Our findings show that the taxpayer would save approximately £50 million per annum if the minimum age of recruitment were raised to 18; it would also result in the army needing to find about 211 fewer new recruits annually, based on current numbers joining the trained strength.

The paper concludes that the case to cease recruiting from age 16 is now overwhelming and urges a full, independent review of the policy, with a view to phasing out the recruitment of minors as an unnecessary, cost-ineffective, and fundamentally unethical practice.

The Ministry of Defence (‘MoD’) had completed its cost-benefit analysis into the recruitment of minors into the armed forces by June 2014 but as of September 2014 has yet to publish it. However, the MoD has disclosed separately that in the financial year 2013-14, the per-capita cost of Phase 1 (initial) training for each recruit who enlisted aged between 16 and 17.5 and completed training (at the Army Foundation College in Harrogate) was £68,751. This figure is between three and four times as high as the per-capita cost of Phase 1 training at the adult training establishments in Catterick and Pirbright.

In order for recruitment of minors to be cost-effective on this basis, their army careers after training would have to be four times as long as those who enlist as adults, but they are only about one third longer on average. The marked cost difference is due mainly to the relatively high drop-out rates among those who enlist as minors (36% of minors vs. 25% of adults between 2010-11 and 2012-13) and also their much longer Phase 1 training (12 months for minors vs. 3 months for adults).

Our own cost-benefit analysis, shown in the report, indicates that in 2013-14, it cost the taxpayer approximately £50 million more for the army to recruit from age 16 than it would had all enlistees been aged 18 or above. In addition, the army could have recruited 211 fewer people overall, due to the lower drop-out rate among adult recruits. This analysis factors in costs of recruitment and Phase 1 training, as well as the differential drop-out rates and average career length of minors and adults enlisting in the army. (Cost of adult training is based on training at the Infantry Training Centre in Catterick (‘ITC Catterick’) alone; costs of training adults at Pirbright are slightly higher than at Catterick but still represent much better value for money than training at Harrogate.)

Whether the Army Foundation College at Harrogate (‘AFC Harrogate’) is considered a training establishment or an education college, it is a highly costly means of recruiting new soldiers and its contribution to their educational attainment compares poorly with opportunities available in the civilian life. By joining the army, these young people, if they underachieved at secondary school, miss out on the opportunity to re-take their GCSEs. At the same time, the policy diverts resources from the recruitment of adults, which is a more cost-effective age group to target. 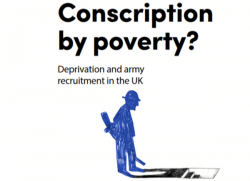