Armistice Day was intended to mark a day of intense sadness and grief at the enormous cost of war and the failure of humanity to prevent it. But the nature of Remembrance in Britain has changed over recent years. The Remembrance period has become elaborate and lengthy and co-opted by military interests and promotional messages. Official Remembrance ceremonies have a narrow focus on British servicemen and women, with little recognition of the effects of war on service personnel and civilians from other parts of the world.

We all have a part to play in the public debate around Remembrance. Individual or community acts of rethinking the Remembrance message are vital to counter the inherent militarism of official ceremonies.

Remembrance is a broad concept. While some emphasise the importance of saying ‘never again’ to loss and suffering, others see no reason to question the morality of the wars in which it happened. While the poppy can signify both these positions, the official act of memorialising war tends to glorify and sanitise it. The focus on honouring members of the armed forces can become blurred. Official messaging by the Royal British Legion, the military, the government and public authorities has increasingly included elements that emphasise demonstrating support the armed forces rather than reflecting on the suffering of war or acknowledging it as human failure.

A sense of obligation to demonstrate uncritical support for marking the day has developed. TV presenters and other public figures are instructed to wear a red poppy for many days before Armistice Day, sporting events in November are heavily branded with the poppy and some schools even require all their pupils to wear one.

Although a charity, the Royal British Legion has developed a style of operating that is reminiscent of a large corporation. It has commercialised Remembrance by heavily pushing the sale of red poppies and related merchandise and claims a legal ownership over the poppy brand. Some of its ventures – poppy-themed pop bands and jewellery – speak more of commercial logic than of sensitivity to the issue of war, death and killing.

Its fundraising through corporate partnerships should also raise major concerns. The Remembrance Centre at the National Memorial Arboretum is sponsored by arms companies, including BAE Systems and Boeing Defence UK (see the full list). Surely this has to be challenged?

The language used during Remembrance is euphemistic, glorifying and sanitising the consequences of warfare. Narratives around the nobility and sacrifice of fighting to protect our freedoms mask the reality of the causes and impact of war and create a sense of uncritical acceptance.

In recent years, there has been more public debate about the character of Remembrance as many people have grown uncomfortable with aspects of it. Many question the imbalance between the act of remembering and the focus on fundraising and promotion of the armed forces. White poppy sales are high as people seek to express their desire for peace through Remembrance. 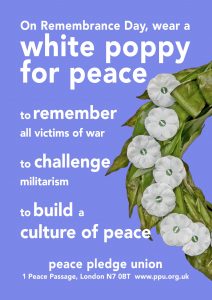 White poppies for a culture of peace

See more about the white poppy and how you can order them from the Peace Pledge Union. 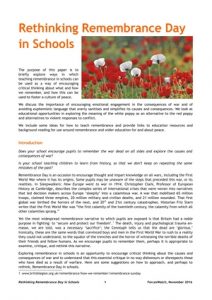 This briefing explores how teaching remembrance in schools can encourage critical thinking about what and how we remember, and how this can be used to foster a culture of peace. See here 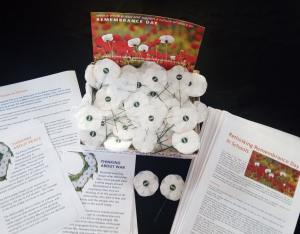 Help your local school explore what the white poppy means and offer it as an alternative to the red poppy. See here 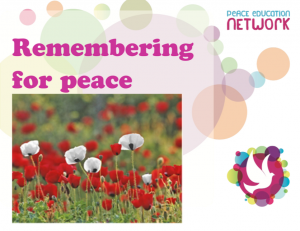 For use in schools with teachers notes and powerpoint. The resource also comes as part of the Teach Peace education pack from the Peace Education Network.