Militarism is ever-present in British society. Soldiers have always marched at state events, cadet forces are an established part of the education system, and armed forces’ recruiting offices can be found in many town centres. Successive governments have been under constant pressure from arms manufacturers to buy weapons. But a new and different tide of militarisation has developed recently. The general public does not seem to be aware of it, and it is not being discussed or
scrutinised.

Since Britain’s unpopular involvement in Iraq and Afghanistan, there has been a concerted effort made by the government and the armed forces to promote the military and to make sure it has enough support to go to war. A government report on National Recognition of the Armed Forces noted in 2008 that, “public understanding of the military and recognition of their role will always determine the climate within which the Forces can recruit, and the willingness of the taxpayer to finance them adequately”.

As a result the armed forces have become more visible across society: in schools, in parliament, in churches, in sport, in culture, on special occasions, during Remembrance, in the media, on public transport, and in local government and other public bodies. We are encouraged to think well of the armed forces and uncritically accept what they do.

This raises many potential problems:

● bias where there should be none, and lack of critical debate – in the media, in schools, in parliament and local government
● stifling of criticism of war and the military and too little support for those who work for peace
● glossing over the negative aspects of the armed forces and glamorising military action
● encouraging young people to take up a career in the armed forces without understanding the consequences
● military-style approaches are presented as applicable to complex social problems without making clear the underlying purpose
● a democratic deficit as the military uses its influence to promote increased defence spending and wider political policy
● weapons and a military presence in civil society becomes normalised and society accepts the violence that is an integral part of the military approach
● society becomes less able to critically judge military action and is more accepting of it
● support for members of the armed forces and veterans is conflated with support for military institutions.

Many people may assume that we have always celebrated Armed Forces Day (which was established as late as 2009), and that the military has always been involved in state education.

The gradual creeping militarism in our society has gone largely unnoticed or unmentioned. But people from across Britain are becoming concerned about it, and have been taking action. This resource will share their experiences and ideas, and share our understanding of how the military is influencing key parts of civil society.

We hope it will inspire and support you to take action on militarism. 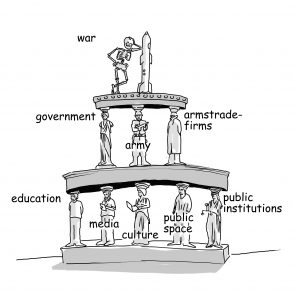 Militarisation: the action of making military in character or style; spec. transformation to military methods or status, esp. by the provision or expansion of military forces and other resources.
Oxford English Dictionary

“To become militarised is to adopt militaristic values and priorities as one’s own, to see military solutions as particularly effective, to see the world as a dangerous place best approached with militaristic attitudes”.
Cynthia Enloe, Globalization and Militarism, 2007